I have a thing for psychedelic music, but if I really wanted to hear a band that sounded like 13th Floor Elevators, I’d probably just listen to Roky wailing, ‘You’re Gonna Miss Me’ – especially since today is his 69th birthday.

At the moment, however, I’m actually listening to ‘Who You Gonna Run To,’ a Britpop – Blur/Stone Roses style cut from Chicago’s own Psychedelic scenesters, ‘Secret Colours.’ The song is off the band’s 2013 release, ‘Peach.’
I’ll admit it. I’ve been secretly following ‘Secret Colours’ since their self-titled debut in 2010. Six years and four albums later, with a series of sold-out shows appearing alongside such Psych heavyweights as Spindrift, Asteroid #4, The Raveonettes and The Warlocks among others, the secret’s out – These guys are clever enough to know that ‘inspired by’ is only a starting point.

Listen closely and you might hear shades of ‘Lush’ ‘Charlatans’ or ‘Ultra Vivid Scene,’ morph unexpectedly into early 70’s T-Rex or the jangly harmonies of Glasgow’s Belle and Sebastian, proving ‘inspired’ doesn’t have to mean stifled.
Core members Tommy Evans and Justin Frederick not only craft songs that refuse to be pigeonholed into any particular genre or time frame, they don’t really care whether it’s not ‘cool’ to pay homage to The Beatles or The Kinks, because nothing goes out of style quicker than ‘cool,’ whereas the best things don’t have an expiration date.
Released in two parts, ‘Positive Distractions’ is the band’s fourth and most cohesive release to-date. Describing the making of the record and his new line-up, Tommy explains:

“We recorded 12 songs in 11 days. We worked fast. We didn’t think about much. When you have something that feels right, it’s definitely not going to last forever, so you’ve got to do the most you can with it before it goes away.”

As with music – as with art…Sometimes you don’t need to over think it – you just need to feel it.

Q: When I first heard Secret Colours, I was hearing bits of Stone Roses, Blur, Tame Impala and a little Brian Jonestown Massacre (and I realize I’m treading on holy ground when I make that last comparison), but I also detected some T-Rex and maybe even the Beatles – Basically Psych to Garage to Britpop and five decades all coexisting in a wonderfully strange new way. In your own words, how would you define your sound?

A: You pretty much nailed it on the head. We love all those groups and we seem to take bits of those groups and put them together to paint our own picture. When creating something new it’s always good to start with something familiar, put it in a blender and see what new flavors you can make.

Q: You’ve gone through some line-up changes recently. Can you tell us about the band’s evolution from your first album ‘Peach,’ which I understand you collaborated with producer Brian Deck (Modest Mouse), to your latest ‘Positive Distractions?’

A: Peach is actually our second record. Brian is awesome to work with. He really pushes good musicianship, rather than snapping amateurs to grid in Pro Tools and auto-tuning the fuck out of everything like many young producers are doing these days. He makes sure the music stays organic. Positive Distractions was recorded down in Dripping Springs, Texas and Dandysounds Ranch, home to the group, Cross Record, who are friends of ours. We basically had a fresh lineup, so I felt we needed a newer approach to making a record than we did with Peach – isolating ourselves from city life, drawing inspiration from nature and not doing anything other than drinking heavily and making a rock record. We also just went back down there to record our follow-up with a similar approach. That should be out sometime in the fall.

Q:: The term ‘polychromatic’ has been used to describe your sound, but the word also applies to colours – What is the significance of your name?

A: We always try to make our sound colourful – that makes for the most interesting music. We want our listeners to put on headphones and drift to wherever it takes them. As far as where the secret comes from, listen to the lyrics and decide for yourself.

Q: What was it like being a midwest band playing SXSW and recording in Austin? Were you influenced by any of the Austin psych bands like the Black Angels… not to mention 13th Floor Elevators were from Texas?

A: All of them. We love the city and the vibe. The Angels were kind to us. We played what is now Levitation in 2012 and 2014. It definitely inspired our musical direction and made us fall in love with Austin. Whenever we have the chance to go back there, we will without hesitation.

Q: So there’s this thing about Chicago and ‘stripes’ – I actually paid homage to Chi Town in a previous post (http://american-noir.blogspot.com/2014/10/she-was-worth-stareshe-was-trouble.html) and noticed Patti Smith, Billy Corgan and Mario Cuomo of The Orwells all photographed wearing stripes… As well, you are all wearing striped shirts in a photo from the Chicago Tribune. Is there something I should know about this?

A: Ha! I’m not sure, strange coincidence. If there is an underground society of rockers with striped shirts I’d like to know about it.

Q: Last but not least, this question is for all of you: If you could have one album to listen to until the end of time…What’s it going to be?

A: Collectively, I think if we were all stranded somewhere we’d be hoping to have a copy of the White Album. That album has a diversity of styles and is double-sided, so we’d get a few more songs to get sick of rather than a lot of 8 or 9 song records that are coming out today.

For more information check out: 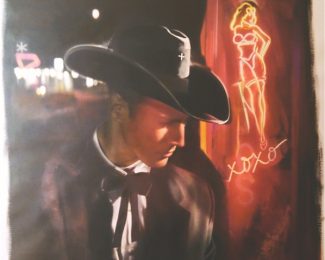 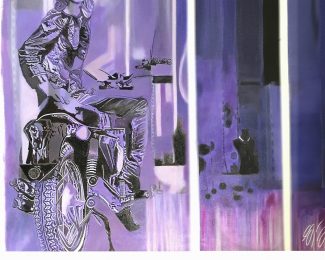